Progress Report – In Conversation with Meg and Sascha 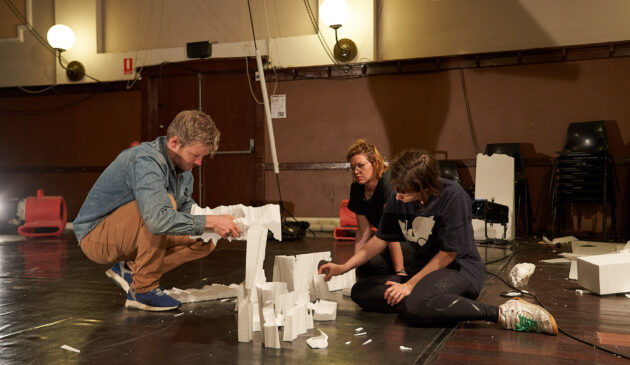 We sat down with Meg Wilson and Sascha Budimski from Progress Report to talk about the design elements of the work.

Alison and Alisdair have talked about how a random piece of styrofoam they found in a dance studio was the initial inspiration for the projects.  What were your inspirations? How has the work evolved over multiple developments?

Sascha: The sound for this development of Progress Report has taken a very clear turn in terms of defining an overarching concept and sonic palette. In the previous development, we were still really getting a feel for where and what the sound could be. We also only had a couple weeks, so the impulse was very much to just throw lots of ideas into the space and see what stuck. The majority of the sound for that development was definitely your more “traditional” sound and music for contemporary dance / theatre – synths, ambiences, beats etc, but a few of the things we tried in that development have ultimately gone on to really define and inform where we are currently at with the work. In that development, Alisdair created a playable instrument out of the polystyrene and we recorded it and incorporated it into the work in both a live and recorded way, which we’re also expanding on in this development. We also recorded what we call a “fan jam” where we stuck a bunch of industrial carpet blowers and an upright industrial fan onto a few dmx faders and mic’d them up. One night Alisdair and I stayed back after rehearsal, hit the record button and jammed it out with the fans and a few microphones. Ultimately, we didn’t end up using any of that recording in the score, but we ended up using the idea of mic’d up fans as a live element during the show instead.

Meg: Alisdair and Alison had developed the concept and palette of materials quite a lot before I came into the project. It was the palette of materials that really led the charge on all fronts. The creative process was all about discovering what was possible with the soft plastics we had been collecting over a number of years and the truckload of styrofoam that was sourced mid-recycling process as well as donated by the general public to the project. There were a lot of very interesting styrofoam forms that you couldn’t quite guess what they were used for in the first place and mounds of soft plastics that could be cut, moulded and melted together to make large sheets of patterned fabric.

What was it like designing a show where the set is also simultaneously the prop, and the inspiration for the concept?

Meg: It’s funny because at times it feels like we don’t actually even have a set. We start with basically a black box and then by the end of the piece we suddenly find ourselves wading through a mess of styrofoam, plastic and debris. Piecing the show together felt a bit like that as well. We started with a few simple shapes and they accumulated as Alisdair, Alison and I found exciting new ways to work with the materials. I guess it felt very much like the pile of plastics that accumulates in your ‘to be recycled’ pile at home.

So much styrofoam! What was it like working with that?

Meg: Some of the styrofoam we sourced were huge pieces that used to line the concrete pillars of carparks or packaging for very large items. Working with those on our makeshift wire cutter was quite cumbersome. The result was stunning though as some of those large pieces were very old and had veins of glue in them that looked a bit like marble. Styrofoam has a multitude of properties you didn’t know it was good for. Alisdair and Sascha found ways to make music out of it and I was able to cut packaging to make interesting sculptural forms and lightweight architectural elements and then melt other pieces into dense bricks. It’s a pity it’s so toxic, smells awful when you cut it with a hot wire and is extremely bad for the environment! I was fully masked up and working out in the open air for most of the development period.

Sascha: An aspect which we only touched on in the previous development but which has ultimately become a major part of the sound for this development, is the sound of the styrofoam itself. Alisdair and I went ahead and recorded a couple hours worth of styrofoam during the recent lockdown. We both then took a copy of those recordings and created our own layers from it using our various techniques. We converged back at rehearsals with our styrofoam morph layers and began trying them with sections of the work and mashing layers together throughout sections of the work. It feels like such an obvious idea path now, I’m not sure why we didn’t invest more into it in the previous development… the sounds we’ve managed to pull and manipulate from the styrofoam have been fascinating and currently [a couple weeks out from premiere] we’re injecting and reworking the sound design to incorporate these styro layers and mutations. We’ve conjured up something very unique with the styrofoam sounds, and we’re really riding that line of recogniseable styrofoam sounds vs “that was styrofoam??”. I’m eager to see if our audiences recognise that a lot of what they’re hearing is the same stuff that’s on stage in front of them.

Sascha- What’s next for the show? And after that- Do you happen to have any interesting, Port Adelaide based projects that you’d like to chat about?

Sascha: After our Vitals season we’re taking Progress Report over to Melbourne for a week of shows at Substation. After that I’m happy to report I’ll be back at Vitals in September with the amazing Em Konig and Jason Sweeney for a project they’ve been developing called Emission. I’m really looking forward to getting stuck into this one, their vision and production values in regards to sound are always quite solid to me, which makes my role as sound engineer a pleasure. It’s also a really nice opportunity to take my “creative cap” off for a project, as my sole focus is just ensuring that they’re feeling as comfortable as possible on stage and sounding great in the room. Mixing stuff that I didn’t have to make and listen to a thousand times is such a fantastic palette cleanser for me, what makes it even better is how much I love what Em and Jason create. I’ve worked with them previously on a show called Masc which we developed here and took over to Melbourne… a couple years later I still find myself washing dishes or folding laundry and subconsciously bobbing my head to some of their songs. Masc was excellent and I really hope they remount it in the future (hint hint Jason and Em). I won’t talk too much about what they’re planning for Emission, as we’ve only had initial production chats about it, but let’s just say I’m pretty excited and it should shape up to be a really great night of music performance. I really try to emphasize that when I talk about Jason and Em’s work; they don’t just play music on stage, they craft and create a strongly conceptualized evening of contemporary music performance and theatre.