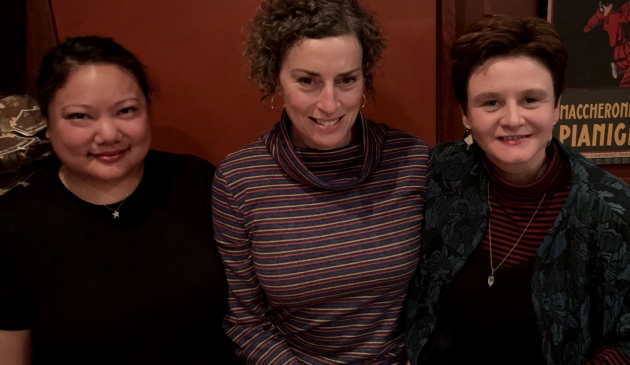 Vitalstatistix has appointed a new Chair to our Board of Management on Tuesday night (May 14). Long-term board member Narelle Walker has stepped down after completing an eight-year term on the Vitalstatistix board including six years as Chair. Replacing Narelle is creative producer and First Nations leader Angela Flynn.

“Narelle has provided exceptional leadership to Vitalstatistix and our board of management, steering the organisation through a significant period of change and accomplishment. Her commitment and passion for Vitalstatistix has been boundless, and she has given significant time, leadership and a great deal of dexterity to the role. Narelle has always championed artists and workers in our organisation and has provided strength, generosity, a calm and always positive outlook and superb vision throughout the last eight years. We will miss her greatly – however we know she is forever part of the Vitals family and community.” – Emma Webb, Vitalstatistix Director

Angela Flynn has been a member of the Vitalstatistix board for two years prior to this appointment. Angela is a Tiwi, Larrakia and Chinese woman based in Adelaide where she works as a producer and arts manager.  Angela is currently the director of Kukuni Arts, an independent arts management and production company, focused on Aboriginal and Torres Strait Islander arts.

Across her career, Angela has developed a depth of experience as a freelance producer that cuts across both the visual and performing arts. Angela was most recently the Performing Arts Manager for Tandanya National Aboriginal Cultural Institute and is the current Creative Producer for the Spirit Festival, South Australia’s premier Aboriginal and Torres Strait Islander performing arts festival.

“We are absolutely thrilled that Angela is stepping up to become Chair of Vitals after several years as a general member where she has contributed enormously to the artistic vision of our organisation, our work with First Nations artists, and has been a fantastic ambassador for Vitalstatistix. Angela’s national and international leadership is and will continue to be an important asset to Vitals. I am so looking forward to continuing our close work together.” – Emma Webb, Vitalstatistix Director.

“It has been such an enormous privilege to serve on the board of Vitals over the last eight years, and the last six as Chair have brought particular challenges and wonderful growth, both personally and for the organisation.  I acknowledge my board colleagues, in particular Treasurer Rebecca Fraser and Deputy Jayne Boase for their brilliant support, and the indefatigable Emma Webb and the Vitals team who deliver a magnificent program Adelaide audiences each year.  Vitals is in good hands with Angela Flynn taking over as Chair.  Her industry insights and clear sighted approach will serve the company well in this next stage.” – Narelle Walker

“I would like to acknowledge the hard work and achievements of the outgoing chair Narelle Walker.  Vitals has undoubtedly been changed for the better by Narelle’s championing of workers and artists, her vision and stewardship of the organisation through periods of great change and mostly her kindness, generosity and leadership.  Narelle has been a great support to me in my time on the Vitals board and I know there are very big shoes to fill!  I look forward to continuing and building upon Narelle’s work and wish her all the very best for her next chapter.” – Angela Flynn