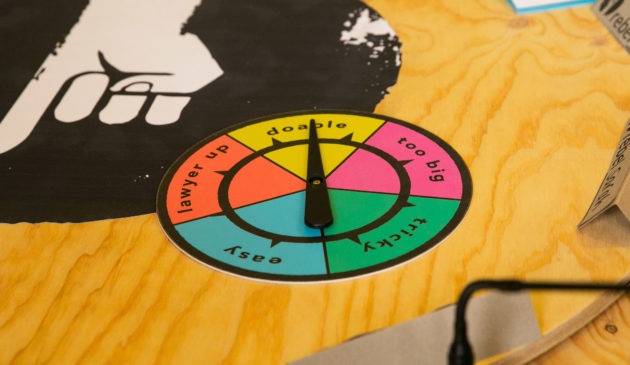 Vitals: Tell us a little (pardon the pun) about tiny revolutions. Where did the idea come from?

Kelli: It came from this growing sense that there were too many epic things going wrong in the world and the overwhelming scale of it all could be paralysing. so I guess we asked ourselves, could we make a work that took on the major global challenges and create actions that were perhaps bite-sized but packed a punch in the public realm?

Vitals: tiny revolutions is broken down into THINK and DO. Can you talk us through the process?

Kelli: During THINK we (pvi, some local artists we are working with and you, the audience) gather together as rebels. Set the timer for 60 mins. Take on one submission and hash out what we know about it. We drink vodka. We end up with one tiny revolution to take out into public space.

[note from vitals: members of the public submitted concerns over the last couple of months. those concerns will be used during THINK]

Annalee: THINK can be a misleading term for this stage. While the session is a combined think tank made up of the audience, pvi, and local artists, this stage could also be described as “conspiring”, “colluding” , “strategising”, and “planning”. There’s discussion, debate, exchange of knowledge and ideas, and then talk about tactics – what will the revolution be? How can we carry it out? Whoever decides to contribute has input, and then a consensus is reached on what the tiny revolution will be.

Kelli: And in DO we lawyer up. Arm ourselves with our ten tiny revolutions and hit the streets.

Annalee: DO is where artists along with pvi carry out the plan (mission?) and execute the tiny revolution. This is usually in public, on public property, and in public spaces. The tiny revolutions are designed to be playful, not criminal, and provide creative disruptions in the public’s day to day. This part isn’t a “show” where an audience is invited to join. pvi get legal advice and take on any potential risk performing the tiny revolution, but their actions are guided by the results of the “think” phase where the audience did contribute to the “mission structure”.

Vitals: And of course- the tiny revolutions are documented, and we’ll put them online so that the co-conspirators, or the audience, can see what happens. Now, we don’t want you to give TOO much away, but can you give us a flavour of what we can expect from the upcoming think tank/revolutionary meeting?

Kelli: A bit of Russian flavour [and not just the vodka], an invitation to sit and listen or raise your voice to contribute, and the sheer terror/pleasure of talking out loud about things that matter right now and creating an idea together.

Vitals: We don’t like to play favourites, but do you have any personal highlights out of the previous actions in other cities?

Kelli: My personal favourite was the do week in Boorloo [Perth] on Whadjuk Noongar Boodja where the tiny revolutions taskforce snuck in to parliament house in with a handful of fake ID badges for ministries that our audience wished existed; the department for the end of the patriarchy, the ministry for indigenous land rights management, the ministry for young peoples rights to protest climate inaction, the ministry for renewable energy. They all made their way through security to be deposited quietly in the upper and lower houses.

Vitals: Any final message for the audience?

KellI: It is soooo much fun and really fires you up!

Annalee: Come along and see for yourself. There’s no pressure to participate or speak out if you’re not comfortable. You’re welcome to just witness and experience.