Emission – In conversation with Em and Jason. 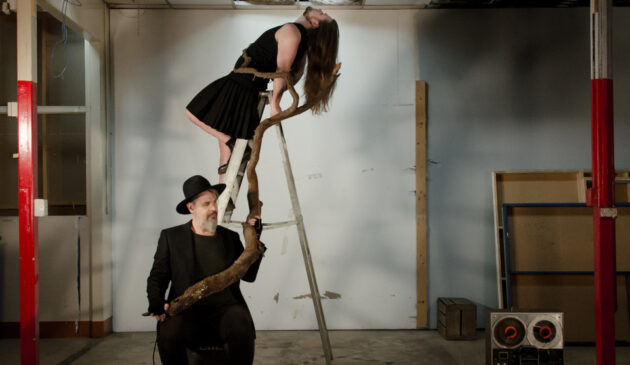 We sat down with Em König and Jason Sweeney to discuss Emission.

Tell us about Emission. Where did the idea come from?

Jason: Initially we wanted to make a work that was centred around eco-grief and to create an immersive sound work that allowed the listener to mourn the slow death of the planet with us. Grim beginnings! To be really really honest, the idea has just evolved over the time that Em and I have been making it. There are definitely still elements that clearly let the audience know that the work is about the grief of the dying planet but we also know that in this space there has to be some element of hope otherwise we may as well unplug the devices and sit and stare at a wall. Which, I don’t mind saying, I tend do a lot of lately anyhow. Personally I am also interested in the idea of an emission being what art does. It is content that fills a space. Sound is great at filling spaces! What happens when we just make sound? Without the need for over-burdening the audience with endless ’this is about’ essays or pretentious waffle in the program! Em and I, I reckon, have arrived at a point now where it really is about the act of making sound and the audience listening. I know in this over-wordy art world where we try and justify every little thing that can be challenging – to just have a work that is about listening. So, making a 50 minute sound emission that you just sit or lay back and listen to. Can it really be that simple? Surely in this saturated media world something so simple could actually be a beautiful thing.

Em: The previous two works Jason and I created were very much song based, highly visual ‘concert-style’ pieces so we really wanted this third work to be a complete listening experience for the audience. That was the initial goal. We spoke at length about creative and inventive ways of making sound, what sound is and how it works and the benefits of creating a performance work that it entirely sound based. i.e. what can sound do that other methods of communication cannot? What can we communicate through sound, where other media have failed us? As for theme – it’s always ‘the end of the world’ with us. But this time we’ve added a spot o’ humour. Necessary, I feel.

Emission is the third work in a trilogy of sound-based performance works. Can you tell me about the previous two, and the connections between the three?

Jason: All three are actually completely different! Sentients was a kind of light extravaganza by Geoff Cobham and Em and I were these two lofty figures high up in the mezzanine area of Hart’s Mill. And we sang 10 songs to an audience who sat in the huge space of that venue. This work was really more about the industry of agriculture and its impact upon the environment. But again, like I was saying above, you really could just come along and sit and listen to some nice songs and watch the pretty lights! Now, Masc was more like a mini electro-pop concert where Em got their heels, tight corset and rubber masks on and I assumed the role of big-hatted pagan priest. It was a bunch of songs we performed against a backdrop of Heath Britton’s evocative video projections and made to sound really good with Sascha Budimski’s audio expertise.

What does your process look like for making this sort of work? What are your inspirations?

Jason: Em and I work like a band. We do weekly rehearsals in a grungy band rehearsal room and we make it like that. We’ve tried making these things in artist residencies but unfortunately many spaces just don’t have the facilities to accommodate really loud sound whilst other people are trying to work. And because we are making music and sound in the same way a band does, it makes sense to go into a band room where you can make as much noise as you want. In terms of inspiration, it might sound daggy but for me it really is just in the collaboration with Em. I guess we sort of feed off each other and make a lot of the creative decisions through improvisation or just going into a room with pre-determined ideas.

Em: As Jason said, we inspire each other. Our creative collaboration came about very organically when we were a couple and would spend long nights in the studio improvising until we found things we like. This has continued to be and remains our tried and true process for everything we work on. We trust each other and that’s what’s most important.

What are you hoping that audiences will take away from Emission?

Jason: Hopefully not hearing loss (bring ear plugs if you can!). To be honest, I’d say just use this performance as a place to go somewhere else for a while that isn’t about talking or about being on your damn phone or doom scrolling.

Em: Something. Anything. Maybe nothing. I don’t expect anybody to take anything away from art at this stage. I just hope they enjoy it.

Jason: There will be loud noise, strobing effects and maybe tears. Tears of joy?