After YES: a collage 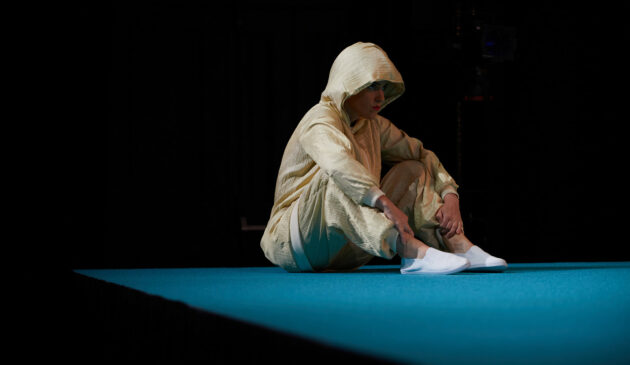 Vitalstatistix Artist in Residence, writer Jennifer Mills, has written a response to YES, the new performance work by acclaimed feminist theatre makers THE RABBLE. Rather than attempt to describe or translate the experience of this extraordinary production, Mills has chosen to assemble a collage poem, a formal response to the work’s invitation to participate in, and widen, its inquiry.

YES is on at Waterside until June 26. Book tickets HERE.

After YES: a collage

1. Why search? What is there to search for?

2. It is a gray zone, poorly defined, where the two camps of masters and servants both diverge and converge. This gray zone possesses an incredibly complicated internal structure and contains within itself enough to confuse our need to judge.

4. There are temporal and collective dimensions to these actions, and their public nature is not inconsequential; indeed, the performance is effected with the strategic aim of maintaining gender within its binary frame. Understood in pedagogical terms, the performance renders social laws explicit.

6. Despite the fact that controllers use many of the techniques deployed in other capture crimes and with similar effect, the main elements of coercive control set it apart from all other forms of oppression. Its particularity lies in its aim – to usurp and master a partner’s subjectivity – in its scope of its deployment, its individualised and personal dimensions, and its focus on imposing sex stereotypes in everyday life. The result is a condition of unfreedom (what is experienced as entrapment) that is “gendered” in its construction, delivery, and consequence.

9. Another inquiry is not going to do it, just get a shovel and start digging.

10. I think the politicisation of natural disasters is very unfortunate.

11. Tasmania is the only jurisdiction in Australia to have made coercive controlling behaviours an offence.

13. The Prime Minister of Australia publicly apologised to me through the media, while privately his team actively discredited and undermined my loved ones. I tuned into Question Time to see my former bosses, people that I had dedicated my life to, deny and downplay my lived experience.

14. He asked me all sorts of questions, too, and pretended to be very loving and kind. As if I couldn’t see through him!

15. Performativity has to do with repetition, very often the repetition of oppressive and painful gender norms . . . This is not freedom, but a question of how to work the trap that one is inevitably in.

16. Coercion entails the use of force or threats to compel or dispel a particular response… coercion can have long-term physical, behavioural or psychological consequences… Control may be implemented through specific acts of prohibition or coercion… but its link to dependence and/or obedience is usually more distal than coercion and so harder to detect.

17. Feeling unsafe? If you, or another adult or child, are in immediate danger call 000.

18. Literature is the question minus the answer.

19. My loved one died in the fires FAQ

20. The rainfall, the extreme weather. We are going to have more flooding and it’s going to be unpredictable and it’s going to be more severe and so as someone who loves Lismore deeply and wants to live here into the future I’m asking for leadership, I’m asking for real and sincere commitment to withdraw support from fossil fuel projects which are driving climate change and making it uninhabitable for us to live here.

21. We were denied funerals by pandemic conditions themselves created by the extension of capital to all corners and all habitats of the world, and without the brief socially-sanctioned ritual, we were expected simply not to grieve at all. The expectation once again that grief is just another form of work we do, and, without the performance, we must continue, unaffected.

22. Where the bloody hell are you?

24. If we had no appetite, we would be free from coercion, but because we are from the start given over to what is outside us, submitting to the terms which give form to our existence, we are in this respect – and irreversibly – vulnerable.

28. As many trauma survivors will tell you, it’s often the lack of an adequate response in the aftermath of a traumatic event, rather than the experience itself, that causes the most psychological damage.

29. What are the words you do not yet have? What are the tyrannies you swallow day by day and attempt to make your own, until you will sicken and die of them, still in silence?

30. To learn which questions are unanswerable, and not to answer them: this skill is most needful in times of stress and darkness.

31. You don’t have to participate in this trivial, superficial continuation of mindless abuse culture just for the sake of civility.

32. We will never forgive you. We will not let you get away with this.

21. Sarah Jaffe, ‘Nothing and Everything: Mourning Against Work,’ Salvage, 2022

23. RFS volunteer in Cobargo when approached by the Prime Minister