The Music of Cher 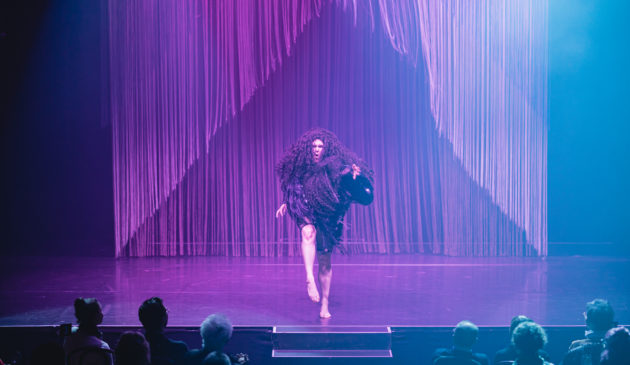 Cher sound designer and co-creator Steve Mayhew has elected to share (cher?) music that inspired the show. Read below for his notes and links to the playlists.

When composing and constructing Cher’s soundtrack Larissa, Sam and I immediately agreed that we would commence the work with a straight lip sync / solo interpretation of the video clip “If I Could Turn Back Time”, complete with canon mounting.

Our next questions were …
>How do we keep the entertainer entertaining us?
>How do we tell an every-woman-entertainer story?
>Which choice hits and deep cuts do we include and which movies, interviews and quotes do we reference to help us tell an epic story of longevity and relevance?

Finding and cataloguing the sound was time consuming from the beginning and there was a lot left on the cutting room floor but in the end everything sort of chose itself. Which is not to say it was easy but instead samples and loops revealed themselves to be manipulated, extended and remixed when required.

Our previous works “The Theatrical Trailer to Alien Five” and “Fanatic” alongside “Skeleton” and “Mortal Condition” have all used samples from popular cultural sources; reshaped, re-contextualised, made and twisted into familiar strange new worlds, and so it goes with Cher.

This is the selection of original tracks as used (in order) in the show. When it came to compiling this list I was amazed that there were only 10 tracks used in the entire work. Some of them only appear for seconds and some are entirely treated unexpectedly.

It was great to discover “The Music’s No Good For You” that was suggested to me by a Cher fanatic friend, and Larissa’s suggestion of using “You Haven’t Seen The Last of Me” where and when we did is perfect in its obvious subtlety. Making a new mix of it using elements of the movie soundtrack, the actual track, and an undisclosed fan’s mix was a lot of fun piecing together to make it sound as if it was always that way. Bass lines, melodies and chord sequences from these songs also contributed to the original music composed for the work, supplying “connecting tissue” and variations on themes for the constant reinvention of the ‘Cher’ like entertainer you see before you.

From the bombast desperation of the Flaming Lips’ “The Gash” to the excellent straight disco of Cher’s own “Take Me Home” and Hot Chip’s pop house rave “Flutes”. I listened closely to understand a sound or even just lounge room danced to these tracks to feel a sense of movement or looseness that I thought I might be able to be replicated in the soundtrack.

Ryoji Ikeda and Christian Marclay are more “art world” extensions of the sample based / plunderphonics inspirational cut up style of DJ Shadow and the Avalanches masterful scratching or The Books spoken word samples but all approach rhythm, ‘nonsense’ and sense making in unique ways.

Seefeel’s beautiful guitar drones and Bodgdan Raczynski’s playful glitchly effect knob twiddles all provided me with entry points across the three years of sketching the soundtrack sporadically in between other work and career moves. I’ve loved making play lists (or mixed tapes) since I could press a record button and this one is actually sequenced to start you off slow and get you moving (even if it’s awkwardly in your own lounge room).

This is not a music play list but a set of mini theory lessons on the politics and movements that have been inspired by or used the technique of sampling/remixing. It bypasses the documentary “RIP: A Remix Manifesto” by Brett Gaylor which is excellent viewing if you haven’t already seen it and instead goes into some great fan based theories and opinions that are just as thoughtful and provocative. It also brings you up to speed with the most recent sampling “movement” or “meme”, a style called “Vaporwave”.

Starting off with a “Everything is Remix” careering through a plunderphonics version of Jolene (Both Ways) – described as “a vortex of androgyny” and then heading across to my favourite “Hauntology” and then finishing off with the original troll work of Negativeland.

Watching these in succession doesn’t give you any complete history – that’s what RIP is for – but what it does give you is an idea of how sampling and remixing, making new material out of old material has been around for years, can be quite political in its nostalgia and nostalgic in its politics.

The constant reinvention of the woman and entertainer you see in Cher (the actual person / celebrity and the dance / cabaret work we’ve made) plays out in samples and waves of nostalgia and politics for you and of you over and over again.