A festival of climate change art for the 21st century: three weeks of performances, installations, talks, workshops and special events in Port Adelaide.

Climate Century is a major public program featuring eight new works by Australian artists who are at the centre of exploring climate change.

Global climate scientists agree we have past the tipping point of climate change; it can no longer be considered a crisis but instead a disastrous condition. Living with, and surviving, this condition is the great experimental challenge of our times and for our planet, culturally and scientifically.

Climate Century offers surprising and profound artworks exploring grief, resistance, survival and reinvention in the 21st century. Each of the works grapple with preposterous pasts and futures; they expand on practices of memorialisation and speculative thinking; they are funny, playful, moving, sad, accessible, fierce and brave.

Climate Century is presented in Port Adelaide across three weeks, at Vitalstatistix’s home, the Waterside Workers Hall, on and around the Port River, and at the iconic Hart’s Mill. The public program has something for everyone – live art, dance, music, video and sculptural installations, and a series of talks, workshops and very special events.

This festival is the finale of Climate Century, a five-year process undertaken by Vitalstatistix from 2014 to 2018. Dive into this finale with us.

This project has been assisted by the Australian Government through the Australia Council, its arts funding and advisory body. 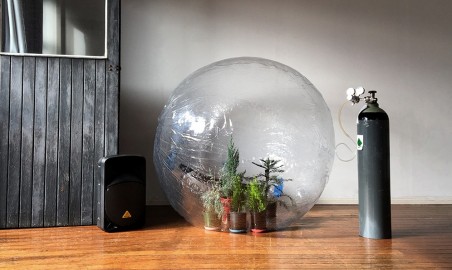 THEN LET US RUN (THE SKY IS FALLING)

A large-scale durational installation offering a visceral encounter with the sky of a wild, geoengineered future.

A sculpture, a watercraft, and an experiment in community engagement with adaptation, everyday creativity and the future of our rivers.

WAR DANCE OF THE FINAL FRONTIER

A video installation in which a collective body powerfully conjures a resistance to an underwater threat to Oceania.